I love Herpetology and Snakes, But i also fears two snakes here in the island. One of them is the Daboia Russelii also known as the Russell's viper with the notorious attitude. in Sinhala we call it "තිත් පොළගා" (Thith Polanga) which means like "the dotted/spotted viper" or "ගැට පොළගා"(Gata Polanga), "ධාර පොළගා"(Dhara Polanga). There are four species in the genus Daboia and in Sri Lanka we have the species Daboia Russelii. This Snake holds the number of second highest snake bites in Sri Lanka, highest number of fatalities and it's the 2nd most venomous viper in the island (Based on LD50 charts , saw scaled viper has more potent venom) as well as the title holder of the longest fangs of any Sri Lankan snake.

Russell's viper is an old world viper ,in other word, a true viper. True vipers doesn't have loreal pits between the eye and nostrils, which means they cannot see through heat vision. Many people might think the large opening in the snout are heat receptors but actually it's the nostril of the russell's viper. Still there is a mystery remains with it's nostril. Many herpertologists described a supernasal sac in this Daboia species, this sac has nerve endings which means it could act as some kind of a sensory organ. This nostril helps people to easily identified the snake as it's the only viper out there with such a big and kinda ugly nostril.

These snakes are widely distributed through out the island from plains to mid hill lands up to 1500m but a common snake in dry zone forests, glass lands and rice fields. Ruesselii can grow up to nearly 5 feet. their babies are around 20-25cm in birth. 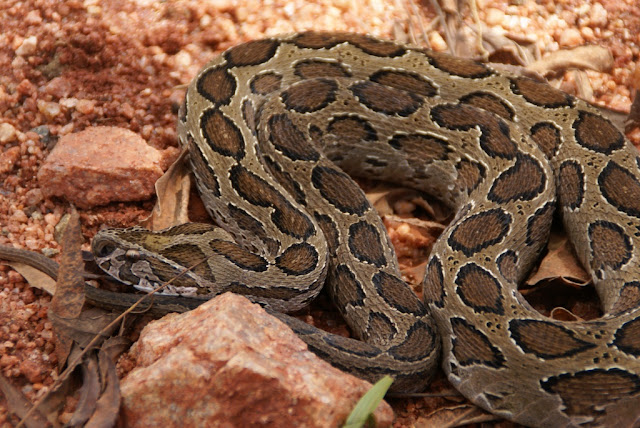 Russell's vipers are ambush predators. They don't chase down their prey and attack. Selecting a suitable place then coiled up and wait for it's prey to come closer. Scent particles from the prey are collected by the forked tongue and transmitted to brain with the help of Jacobson organ. Once it has a accurate striking distance, with a snap it attacks and injects venom. Russell's vipers are basically nocturnal animals but sometimes can be found in day time and feeds mainly on rodents and other arthropods. Rats, mice and shrews are it's favorite. This is the main reason why people often encounter with these snakes. these rodents choose human habitations as their food source, as a reason most snakes come after them in to houses or any place where humans live.

The behavior of Russell's viper is can be seen well in the night. However it is an aggressive snake. This guy rarely gives a dry bite. If it's bite you atleast a drop of venom will be injected. Adults are become sluggish and lazy while juveniles will attack even with a small provocation. When threatened it gets coiled up in to a striking position and starts hissing. They can hiss better and louder than a Cobra. with this striking pose it can lift most of it's body from the ground with so much power. So be careful when approach to a coiled up ruessell's viper.

Reproduction take place once a year. Usually in early months of a year russell's vipers mate. After five or six months female viper gives birth to 20-40 live juveniles. (Russell's vipers do not lay eggs) This process takes hours. in one case, a female took 4.5 hours to deliver 11 babies. Here is a image of a female russelii giving birth to live young. 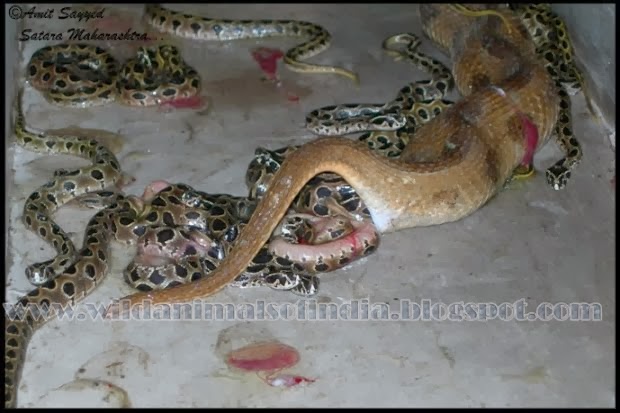 How to Identify a Russell's Viper

1) Coloration - Russell's vipers have a taned brownish or yellow color along with three raws of elliptical spots beside the body and on top scales. 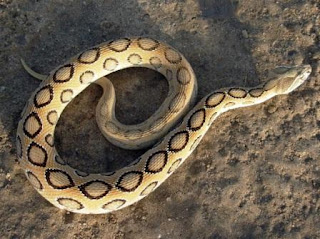 These spots features an outer black ring and spots can be seen from head to tail. juveniles are bright in color

3) Size - Adults grow up to nearly 5 feet. they have chunky bodies with a fat tail.


Venom of the Russell's Viper

This snake has more than 90% of Hemotoxic venom. venom are type of modified saliva. venom of the russell's viper can cause serious problems to the blood and muscles. it makes your blood clotting and destroys muscle tissues. The venom gland is located between the eye and muscularis compressor glandulae.

Lethal dose for humans is 40-70mg of venom. An adult can inject up to 130-250mg of venom in a single bite. so if you get bitten by this snake, take extreme medical caution or your life will be in danger.
Like all the other vipers, Russelii is equipped with Solenoglyph front fangs, hanging on the upper jaw. sometimes the replacement fangs are also can be seen.

Symptoms of a bite : Swelling
Bleeding from gums or with urine
Muscle pain due to tissue damage
Painful headache
Vomiting
Kidney failure (if not treated quickly)
Drop in blood pressure

Take a look at this video, you will see the power of russell's vipers venom.

Here is a small introduction to the Sri Lankan Russell's viper done by Animal Venom Research International. big thumbs up for them for the information.


Finally i request from all of you to not to kill these animals. They are part of the nature. It's true they can be dangerous to humans but they only attack if provoke. Try to avoid them and do not try to catch them if you are not a good snake catcher. It's sad to see many people miss understood Sri Lankan sand boa to russell's viper and killing them. try to love snakes :) Please do share your knowledge about this snake in the comments below.

Email ThisBlogThis!Share to TwitterShare to FacebookShare to Pinterest
Labels: Snakes